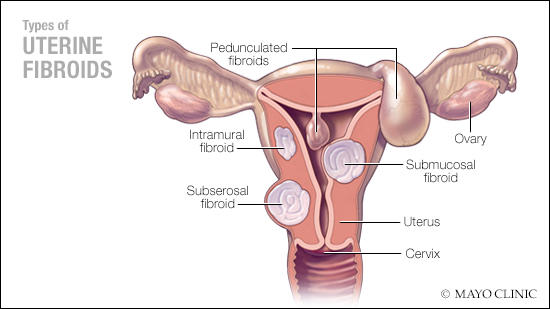 Fibroids range in size from seedlings, undetectable by the human eye, to bulky masses that can distort and enlarge the uterus. You can have a single fibroid or multiple ones. In extreme cases, multiple fibroids can expand the uterus so much that it reaches the rib cage and can add weight.

Many women who have fibroids don’t have any symptoms. In those that do, symptoms can be influenced by the location, size and number of fibroids.

In women who have symptoms, the most common signs and symptoms of uterine fibroids include:

Rarely, a fibroid can cause acute pain when it outgrows its blood supply, and begins to die.

Fibroids are generally classified by their location. Intramural fibroids grow within the muscular uterine wall. Submucosal fibroids bulge into the uterine cavity. Subserosal fibroids project to the outside of the uterus.

When to see a health care provider

See your health care provider if you have:

Seek prompt medical care if you have severe vaginal bleeding or sharp pelvic pain that comes on suddenly.

Read more about the causes, risk factors, prevention and treatment.