Treatment strikes a chord with patient after life-altering accident 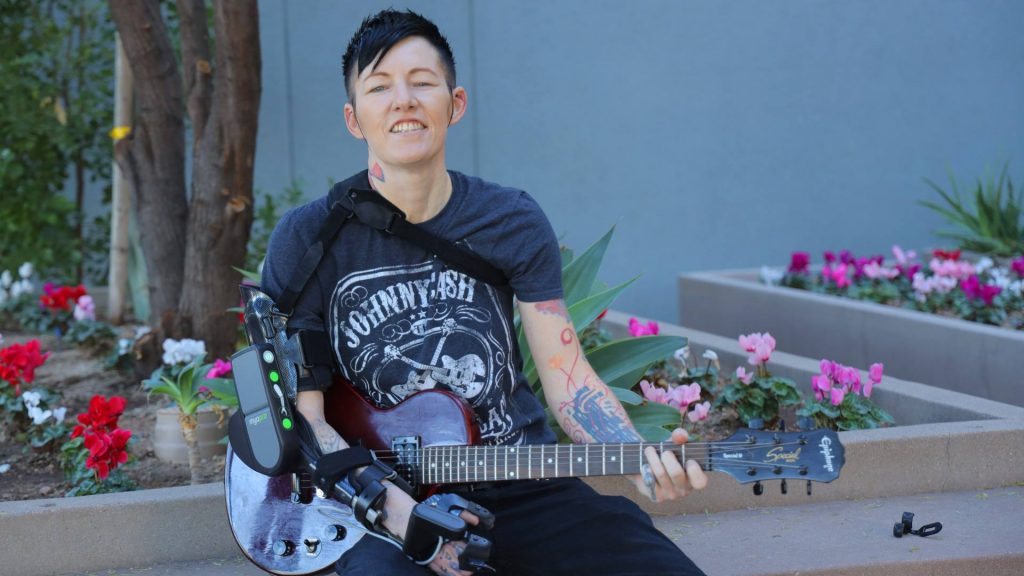 Sara Groves was seriously injured in a hit-and-run accident that changed her life. Among other things, the accident caused a severe brachial plexus injury that left Sara with paralysis in her right arm. She says she credits her medical team at Mayo Clinic in Arizona for helping her move forward, and for the courage to once again pick up her guitar.

Watch: Sara Groves talks about her journey of healing at Mayo Clinic.

Journalists: Broadcast-quality video is available in the downloads at the end of the post. Please courtesy, “Mayo Clinic News Network.” Read the script.

Arizona resident Sara Groves leads a purpose-driven life. From running a service whose goal is to prevent drinking and driving, to serving as the co-chair of the Phoenix Police LGBTQ Advisory Board, she looks for ways to change her community for the better.

Before 2015, Sara’s life was headed in a completely different and positive direction. A musician and hair stylist, she expressed herself through art. But that comforting life came to a screeching halt in May 2015 when, while riding her motorcycle, she was seriously injured in a hit-and-run accident that ultimately changed her world.

Sara was on her way to visit her mom, who was in the hospital at the time, when she caught sight of a speeding vehicle. That car knocked her and her motorcycle over the median into oncoming traffic. An approaching car could not stop in time and ran over Sara. Despite wearing her helmet and protective jacket, Sara’s injuries were grave. “The last thing I remember was that I saw the car come all the way up to my thigh,” Sara recalls. “And then I was out.”

The driver of the car that accidentally ran over Sara stayed on the scene and called paramedics. The driver of the vehicle that caused her to be projected over the median never stopped. To this day, that driver has not been apprehended.

The horrific accident left her right arm shattered, with 20 fractures, a brachial plexus injury and serious nerve damage, complications that significantly changed her life. The crash also shattered Sara’s clavicle, and she suffered fractures at the base of her skull, entire vertebrae, ribs, legs and scapula. She admits that she doesn’t remember the exact number of fractures she sustained. The crash also left her with neuropathy.

Sara recalls that when she regained consciousness while in the hospital, her first instinct was to try to move her right arm. “I’m a guitarist, so being a musician, it’s just natural to check to make sure you can do what you do,” she says. Her fear about her right arm was spot-on. It was paralyzed. “It wasn’t just losing arm function,” Sara says. “It was my life. I was a guitarist. I was a hairdresser. I was a doer. It was very traumatic.”

After being treated at other Phoenix area hospitals where Sara underwent surgeries to restore function and sensation of her triceps, (the muscles responsible for the extension of the elbow joint) she came to Mayo Clinic in Arizona. It was there that she met Shelley Noland, M.D., Plastic and Hand Surgery, who performed brachial plexus surgery for Sara. “It was like a rock star was coming into my room,” she says.

The brachial plexus is a network of nerves that sends a signal from the spinal cord to the shoulder, arm and hand. With the goal in mind to get bicep function, Dr. Noland performed surgery that removed Sara’s gracilis muscle from her inner thigh and connected it to her collarbone and tendons of the bicep.

Sara’s injury to her arm has greatly impacted her lifestyle, including her love of playing the guitar and working as a hairdresser. Still, she doesn’t let her disability discourage her. She manages to cut her own hair.

Getting creative about life’s everyday challenges

“I have this best friend I call Duct Tape. Duct tape is my right hand,” Sara quips. “In the morning when I get up, I have taped my bathroom counter with all the utensils I might need for cleaning or clipping my nails, or doing my hair.” Still, her disability also affects her day-to-day chores. Eating is a particular challenge. The usually simple task of opening a package containing a burrito is difficult with only one arm, and often her teeth have to help the task.

Unable to enjoy her hobbies or work as a hairdresser, Sara was forced to consider where she would go from there. An admitted recovering alcoholic, and believing that the person who hit her was drunk, she decided to find a way to fill her time and encourage people to not drink and drive.

She ended up buying an old bread truck, which she decked out with vivid artwork and laser lights. She named the truck the “Jam Tram,” because the interior was bright, featured upbeat music and a dance floor. Sara’s plan was intended to attract young people in the downtown Phoenix entertainment area—with the goal to have them ride safely on the Jam Tram if they had been drinking. She only asked for an optional $5 donation.

The Jam Tram wasn’t income for her, Sara explains. “It was just to pay for the gas, but it gave me a sense of purpose. I knew I was giving back to the community. It made me happy to know that they weren’t on the street,” she says. “My hope was that people were safer.”

A new purpose, a sense of community

Sara is passionate about her volunteer work in the community to encourage safe driving. She maintains two forums on Facebook, one focused on overcoming adversity, and the other a brachial plexus injuries support group, where members discuss tips for completing everyday tasks.

Despite all she does for the community, Sara is only human, and she admits to getting upset when reflecting on the accident and how the driver who was the cause is still somewhere out there, perhaps not even knowing what he or she had done. “I don’t know if that person was impaired. I have no idea what was going on in that person’s life at the time,” Sara says. “Coping can be difficult at times, but for the most part, I try to do things that help me move forward. Being that I was not born disabled, it is hurdle after hurdle. She admits that she deals with more sadness, anger and frustration than happiness. “But I stay focused on the positive. I keep myself challenged, trying to be a role model, and I put a lot of effort into social impact,” she says.

As the years since her accident go by, Sara says her perspective on the life-changing crash is evolving and growing better by the day. Her dedication to working with people who cope with alcoholism gives her a purpose.

“I love Mayo Clinic,” says Sara. “Before coming to Mayo, I saw some doctors elsewhere who wouldn’t even say their names.” She credits her Mayo physicians, Dr. Noland, Alanna Rebecca, M.D., Plastic and Reconstructive Surgery, and Pelagia Kouloumberis, M.D., Neurology, and her physical therapists for moving her life toward acceptance – and continuing to gain strength. “They have been fantastic,” says Sara. “They go way beyond to try to do something I want, rather than something they want.” Sara was a bit reluctant to ask, but she told her physicians that her dream is to play the guitar again. “That’s my request, and the doctors have tried to help me with that, so that’s awesome,” she says.

“It seems like I have grown fonder of my life now, and in weird ways I am grateful for my life being altered,” Sara says. “It has sent me in a better direction. Every step is a step forward.”

Given Sara’s dedication to working with her physical therapists at Mayo, she is more able to build some muscle strength and to flex her arm. On the night of Oct. 28, 2020, an elated Sara sent a Facebook message to legions of her friends. Thanks to a robotic brace that is helping her restore some function in her arm, she wowed herself by cautiously strumming the strings of her guitar. She plans to fine-tune that effort, and promises, “One day I will sing a song to the people I love.”

For the safety of its patients, staff and visitors, Mayo Clinic has strict masking policies in place. Anyone shown without a mask was recorded prior to COVID-19 or recorded in an area not designated for patient care, where social distancing and other safety protocols were followed.