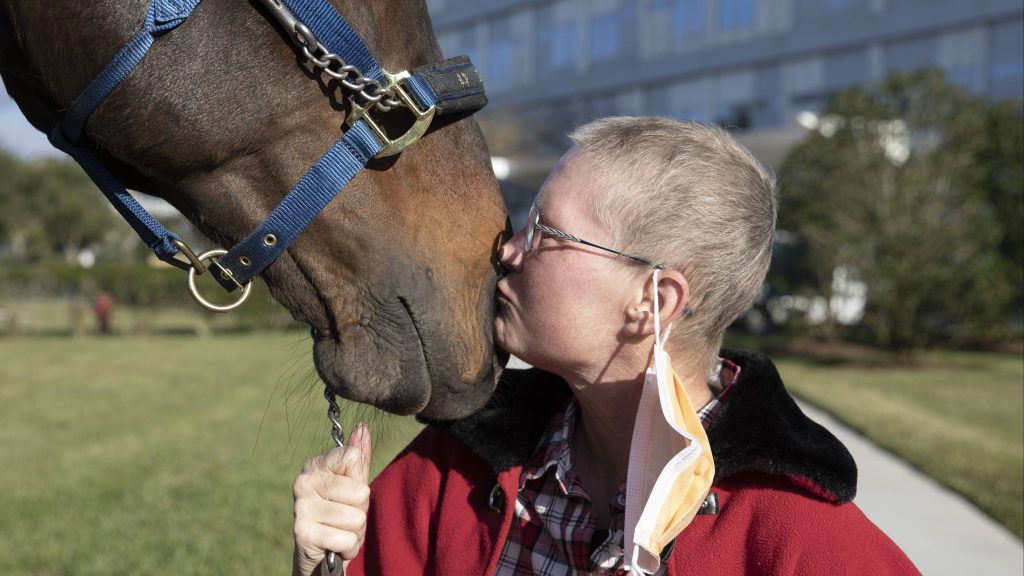 When Anissa Cottongim was diagnosed in December 2019 with leiomyosarcoma, a type of cancer that affects the smooth muscle tissue of the body, she knew Mayo Clinic was the place to go. “Mayo Clinic is, well, Mayo. And I knew I needed a specialist since this sarcoma is rare,” says Anissa, 51.

But little did the Ocala, Florida, resident realize just how far the team at Mayo Clinic would go to address her needs.

Despite trying several chemotherapies, by March 2020, Anissa’s cancer had spread. She had several tumors in her abdomen, which doctors said were inoperable. Aside from causing immense pain, the tumors caused fluid to build up in her body and made it challenging for her to eat.

Though she lived two hours away, Anissa’s family would drive her to Mayo Clinic in Florida for care. “The standard of care is much higher, and I trust the Mayo doctors,” she says.

About a week before Christmas, Anissa began experiencing issues again, and she was admitted to Mayo Clinic Hospital in Florida. There doctors removed almost 6 liters of fluid from her abdomen.

“I was in significant pain,” Anissa recalls, acknowledging that the journey has been mentally exhausting, as well. “All I could think about was how bad I felt. I was not doing well physically or emotionally.”

On the afternoon of Dec. 22, 2020, Anissa’s mother, Ann Cottongim, arranged for “sunshine privileges,” which is when hospitalized patients can spend time outdoors, taking in fresh air and vitamin D.

As she was wheeled outside, Anissa spotted an odd sight: A horse was grazing on a grassy knoll between the hospital’s Emergency Department and staff entrance. And the horse seemed familiar. It looked like Tatendrang, a 14-year-old German Trakehner stallion Anissa owned. But Tate, as her horse was more commonly known, was training and competing five hours away in Alabama.

As her mother wheeled her closer, Anissa began to cry as she realized it was her horse.

Journalists: Broadcast-quality video is available to download at the end of this post. Please courtesy, “Mayo Clinic News Network.”

Without Anissa’s knowledge, several of her friends decided that a visit from Tate would raise her spirits. Together, with Anissa’s mom, hospital nursing staff and Security, they made arrangements.

Madison Nipper, one of the nurses on 3 South, recalls being approached with the idea. “We understood the patient’s suffering, and seeing their horse meant a great deal to both the patient and her family. As nurses, our hearts just couldn’t say no. We are extremely happy that we were able to put a smile on their faces,” she says.

Though a horse on campus may have been startling to some, Anissa says the fact that the clinic allowed the visit is not surprising. “If it will help a patient, Mayo will do it,” she says.

There is no denying that Anissa has a unique relationship with Tate. The stallion was born in her lap in March 2006, and the two have had a special bond ever since. She relates a quote, which Anissa says sums up her feelings: “There is something about the outside of a horse that is good for the inside of a person.”

“Tate gives everything to his humans, and for me that love and bond lifts me up. Seeing him made me care about regaining strength and helped jerk me back out the dark spot I had fallen into,” says Anissa, who was discharged home in time for the holidays a few days later.

Though her journey is ongoing, Anissa says she is beyond grateful to the care provided to her by Mayo Clinic. “I cannot say enough good things about Mayo. Without exception, the doctors, nurses and staff all care about the whole person. It’s the little things ― the small, thoughtful acts ― that really make things easier and boost spirits. And that is why all my care is at Mayo Clinic.”