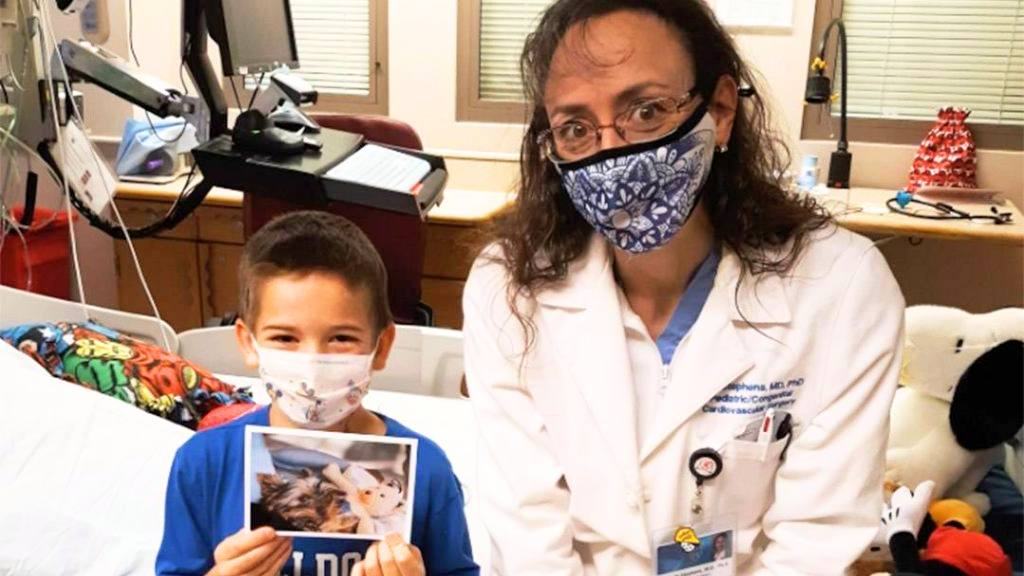 Pediatric patients under the care of Dr. Elizabeth Stephens, may wake up from surgery with art on their chest. It all started when she spontaneously surprised Dalton Hinman with a drawing of a bulldog on his bandage when he awoke from surgery. There’s a story behind that.

This article is written by Mayo Clinic Staff.

Creating a connection with a child undergoing surgery can be a momentous task for any physician. For Dr. Elizabeth Stephens, a pediatric and congenital cardiac surgeon, the key is a fine-tipped Sharpie. With a few quick pen strokes, Dr. Stephens delights her young patients with artwork on their bandages.

Art premiere with a bulldog

“Whoa, that is cool,” Kayla Hinman remembers her son, Dalton, saying after he saw the bulldog Dr. Stephens had drawn on his chest bandage.

Dalton, who is 8, had just woken from the first of two surgeries he had at Mayo Clinic in Rochester last year. In October, Dr. Stephens repaired Dalton’s pulmonary arteries and replaced his pulmonary valve. In December, she also fixed Dalton’s coarctation, a congenital narrowing of the aorta.

“Dr. Stephens did an amazing job explaining what the surgical plan was and answered all our questions,” Kayla says.

And Dr. Stephens had questions of her own. Important ones. She asked Dalton about his favorite things, and soon the conversation turned to the Bulldogs, his grade school basketball team back home in South Dakota.

“He was wearing his team T-shirt to his clinic visit,” Dr. Stephens says. “At the end of the case, I asked the nurse if she had a Sharpie, and I looked up a bulldog image on my phone and drew it on the bandage labeled ‘Dalton, star of the bulldogs.'”

Kayla says she had no idea Dr. Stephens drew the design.

“It was a long wait to see Dalton after surgery, so coming into his room that was the first thing we saw. It was so special,” Kayla says.

That spontaneous decision to draw the bulldog kicked off a new habit for Dr. Stephens, who now routinely quizzes her young patients about their favorite things to come up with ideas for a bandage design. That has led to many more creations. She has drawn a lumberjack, dolphin, cat, frog, Winnie the Pooh, the Minnesota Vikings logo, and many other images.

Support from the care team

“My operating room nurse surprised me one day with a bag of colored thin-tipped Sharpies, but as the ideas grew, there were some colors missing,” Dr. Stephens recalls. “I was trying to draw a cute reindeer around Christmastime, and there wasn’t any brown, so I tried to mix the colors. Then for Christmas, my team gave me the ultimate box of colored Sharpies, and I am set for life.”

I do heart surgery because it’s my calling, and I love the privilege of taking care of kids.

To make sure the beautified bandages can turn into a keepsake for families, Dr. Stephens now draws her images on extra bandages that are placed atop the real ones.

“The parents see them when they first see their child in the ICU. For the kids, we have to take a photo and show it to them because the bandages are on their chest,” Dr. Stephens says.

Kids and their families aren’t the only ones benefitting from Dr. Stephens’ creative touch. It helps her, too. She says creating art on bandages is a way to de-stress after a case.

“I do heart surgery because it’s my calling, and I love the privilege of taking care of kids. But the parents and their kids don’t get to see the art of what I do to fix hearts on the inside. They only see a scar, but this way, they also have something beautiful on the outside,” she says.

Dalton received a second dose of Dr. Stephens’ art when he requested a John Deere tractor to decorate his bandage after his second surgery.

It’s that extra care that makes his mother so grateful for her son’s journey at Mayo Clinic.

“I have never met such a humble surgeon. Dr. Stephens is so genuine, and this drawing was proof that she cares about the little things. Dalton really enjoyed talking with her, and she took the time to explain what she had done. That meant so much to all of us,” Kayla says.

Dr. Stephens says she isn’t often in the room when families see her designs for the first time, but her drawings show how much she and everyone at Mayo care about them and their child.

“This is just a little token of that,” she says.