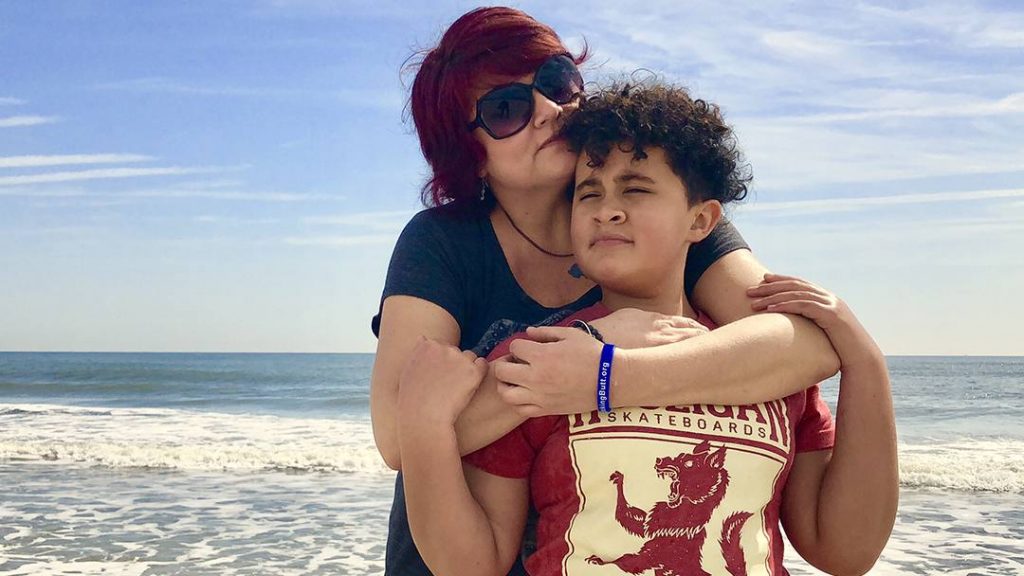 Every March for the past five years, Amy Figgs has taken to social media to remind her family, friends and followers to get a colonoscopy. Using #CheckYerButt, Amy has become an advocate for colon cancer after she was diagnosed the day after her 45th birthday.

The day after her 45th birthday, Amy Figgs found herself in the hospital with severe abdominal pain. She soon learned it was much more than a bad stomachache. Doctors in her hometown of Lexington, Kentucky, diagnosed her with metastatic colon cancer.

“I was stage 4 with cancer in my colon and my liver,” recalls the mother of two. “They basically told me I was inoperable.”

Amy wasn’t about to give up, so she began a biweekly chemotherapy regimen. But fear was ever-present. By mid-2016, Amy realized she owed herself a second opinion.

“I had nothing to lose, so I picked up the phone and called Mayo Clinic,” she says.

That call opened the door to new treatment options and a new way forward for Amy, who will celebrate five years of being cancer-free this year.

After making a 10-hour drive to Mayo Clinic in Florida, Amy met with a team of medical professionals that included Amit Merchea, M.D., a colorectal surgeon, and Justin Burns, M.D., a liver transplantation surgeon.

“Colorectal cancer is very common in the United States, affecting about 140,000 people annually,” Dr. Merchea says. “It’s a disease where we’ve had dramatic improvement in terms of overall survival. And with surgical intervention, most patients can achieve a cure.”

“They made no promises, but they gave me hope,” Amy says. And after some additional testing, she returned to Kentucky while her care team developed a plan to manage her disease.

“The multidisciplinary approach of Mayo Clinic allows us to help patients like Amy with complex tumors in her colon and liver,” Dr. Merchea says. “Despite what she was told elsewhere, we felt we could remove the tumors and offer her a better chance at long-term survival.”

Amy was on her way to an outing with friends when she got a call from Dr. Merchea. “As soon as he said, ‘We can do this’, I just started crying,” she says.

“It’s common for people to be told that there is nothing surgically that can be done for them in both colon cancer and liver cancer,” Dr. Burns says. “Fortunately, surgical techniques have evolved so that we can be more aggressive and can take out more cancer.”

On Nov. 10, 2016, Drs. Merchea and Burns worked together to remove the cancer from Amy’s body. “In a single operation, we were able to remove the affected parts of her colon and liver,” Dr. Burns says. “That meant a shorter hospital stay, and a quicker recovery and return to normal life.”

Journalists: Broadcast-quality video pkg (1:00) is in the downloads at the end of the post. Please courtesy: “Mayo Clinic News Network.”

After the surgery, Amy continued chemotherapy for a few months before graduating to the status every cancer patient desires: no evidence of disease. She has remained cancer-free since. “It’s a great feeling,” says Amy, who now undergoes annual surveillance near her home in Kentucky.

Looking back on her journey, Amy admits that in the early days of her diagnosis, she was just going through the motions and was slow to process. Over time, however, she realized how important it was for her to advocate for herself ― a message she now passes on to others.

Amy shares her experiences with others through an online blog, social media and community outreach. She is publishing a poetry book that includes some of the writing inspired by her experience with cancer. And every March, she takes to her social media feed to remind folks to have a colonoscopy and speak up if they think something isn’t right.

“I want others to know that it’s OK to not just to take the information you’re given. Ask questions, do your research and then make decisions that are right for you,” she says. “Mayo Clinic empowered me to have control in what was happening to me,” she says.

Her life now is a stark contrast to what her doctors originally predicted.

Today, Amy enjoys a new job working with homeless young adults ― a position she loves ― and has celebrated many everyday moments, including seeing her daughter graduate college and her son thrive in virtual school. Plans are underway for a hiking trip to California once COVID-19 travel restrictions ease.

“It’s not always about the big milestones,” Amy says. “Part of my gratitude to Mayo Clinic is being able to celebrate today. Cancer is still always on my mind, but it hasn’t stopped me from living an amazing life.”

For the safety of its patients, staff and visitors, Mayo Clinic has strict masking policies in place. Anyone shown without a mask was recorded prior to COVID-19 or recorded in an area not designated for patient care, where social distancing and other safety protocols were followed.