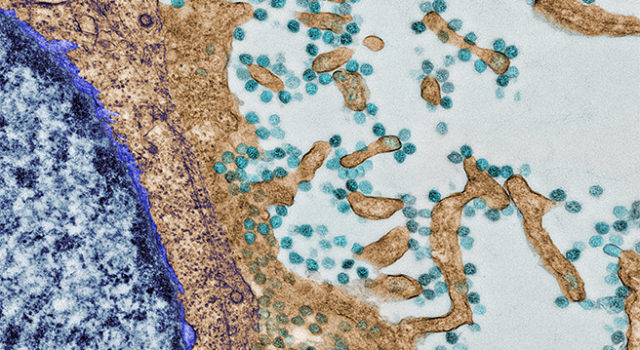 As is clear after months of the pandemic, COVID-19 can affect people in a number of ways. Some can be infected and have no symptoms ― what’s known as asymptomatic. Others have symptoms, but do not have a serious illness. A third category, however, can require hospitalization for intensive complications. For those with symptoms or those who are progressing to hospitalization, researchers are looking at what might work, and finding glimmers of hope in experimental therapeutics, both new and old. In the hospital, there are a few ways patients can be supported through this illness. There are two main categories of experimental therapeutics: antiviral drugs and immune modulators.

This group of drugs prevents a virus from copying itself. RNA interruption works because unlike human cells and DNA, SARS-CoV-2 carries its instructions for replication on RNA. Because viruses can’t replicate on their own ― that is, they are not alive in the same sense that people are ― a virus must make more viruses by hijacking a host cell. Typically, antiviral drugs target one aspect of that hijacking/replication process and block it.

One example of an antiviral drug is remdesivir. Remedsivir blocks the translation of RNA that allows the virus to copy itself. According to data published May 22, 2020, in The New England Journal of Medicine, the drug shortened recovery time by four days among hospitalized patients, compared to a placebo. It was authorized by the FDA for experimental use to treat severe COVID-19 on May 1, 2020.

Another class of experimental therapies being investigated for patients switches focus from the virus to the body’s immune system. These drugs and therapies are based on drugs that exist for other purposes, as well as new drugs that are in development specifically for treatment of COVID-19.

Immune System-Focused Experimental Treatment
Called immunomodulatory therapy, these drugs focus on the response of the immune system to the virus. One group of drugs, called steroids, calms the immune system. People generally take a steroid for conditions such as arthritis, asthma, or as part of treatment for some cancers or flare-ups of multiple sclerosis. Steroids act on inflammation and the ways in which inflammation develops and keeps escalating. Researchers are determining if this type of intervention is helpful for serious cases of COVID-19. In one paper, published July 17, 2020, in NEJM a steroid called dexamethasone was reported to decrease the death rate, as measured at 28 days, of patients on ventilation or receiving oxygen from 41.4% to 29.3% and from 26.2% to 23.3%, respectively.

Other immune modulating drugs focus on a part of the immune system called antibodies. These Y-shaped snippets of protein have various functions, but basically they attach to something the body needs to pay attention to and flag it for immune system attention.  Here’s an example: When a virus invades a cell, it drills through the cell’s membrane, takes over and makes copies until the cell bursts, sending the new virus particles out to infect other cells. As the virus travels, some of these bad actors trip an immune system “red alert.” After a series of events, immune cells called B cells transform into plasma cells and begin to churn out antibodies. Some antibodies smother the invading virus, basically gluing it into an immobile, sticky mess. Other antibodies fit like a key into a lock on the virus membrane, blocking it from drilling into a new cell and continuing the process of replication.

According to an article in Nature, antibodies were first discovered in the blood of animals exposed to diphtheria or tetanus toxin more than 100 years ago. But it was difficult to isolate just one type of antibody and reproduce it for study.

In 1975, researchers found a way to produce only the antibody they wanted by combining the cell producing that antibody with a myeloma cancer cell, which replicates without the normal cellular breaks on division. The cells were cloned and grown until a line was isolated that produced only the target antibody. Eventually, they were called monoclonal antibodies. Drugs based on monoclonal antibodies are designed to push the immune system into action or block its activity. These drugs can also help researchers develop new ways to diagnose and treat disease. These drugs tweak, or modulate, proteins or cells that are responsible for immune responses.

Read the rest of the article on Discovery’s Edge