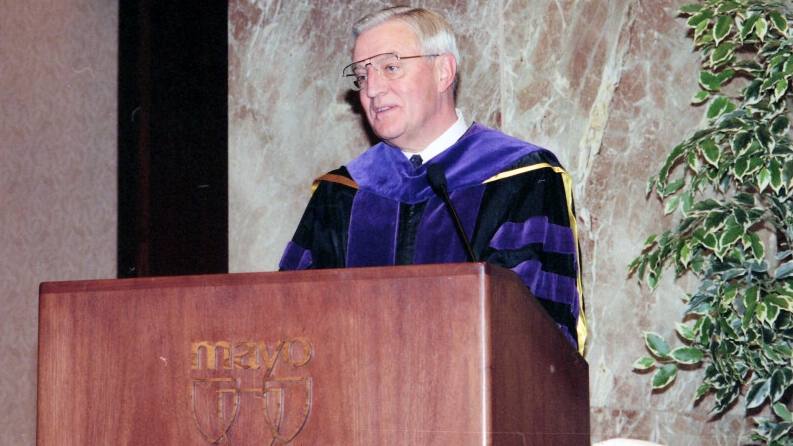 Walter Mondale, former vice president, known for his many years of public service to the country and the state of Minnesota, died on Monday, April 19, at his home in Minneapolis. He was 93.

Mr. Mondale was a member of the Mayo Clinic Board of Trustees from 1989 to 1994 and from 1997 to 2001. His public service included serving as Minnesota attorney general, U.S. senator from Minnesota, and U.S. ambassador to Japan. He served as vice president under President Jimmy Carter from 1977 to 1981, where he was known as a genuine partner to the president. When he ran for president himself in 1984, he selected Geraldine Ferraro as his running mate, the first woman nominated for national office by a major party.

During his time in the Senate, Mr. Mondale was known for his strong support of civil rights, education, health care, child care and consumer protection. He was a “servant leader” before the term was coined, and he saw his contributions to Mayo Clinic as part of his calling to public service. “I’m a small-town kid from southern Minnesota who grew up right next to [Mayo Clinic], and it was the highest honor to be on [the] board,” Mr. Mondale has said of his service as a member of Mayo Clinic’s Board of Trustees.

During his time on the Mayo Clinic Board of Trustees, he saw the renovation of the Mayo Building and completion of Gonda Building – the largest practice integration project in Mayo’s history. He was the keynote speaker at the dedication of the Nathan Landow Autrium in the Gonda Building.

“We are deeply saddened by the passing of Mr. Mondale and extend our heartfelt condolences to his family. His service was a blessing to our nation, the state of Minnesota and Mayo Clinic, and he was a long-time champion for our patients and communities,” says Gianrico Farrugia, M.D., Mayo Clinic’s president and CEO. “Mr. Mondale’s commitment to Mayo Clinic spanned decades, and we gratefully remember his contributions to our patients, staff and organization.”

Minnesota Governor Tim Walz has ordered Minnesota flags to be flown at half-staff at all state buildings in Minnesota until sunset on the day of the interment of Mr. Mondale, to honor his life and legacy.

The Mayo Clinic Board of Trustees is a 30-member group that includes public representatives, Mayo Clinic physicians and administrators, and is responsible for patient care, medical education and research activities throughout Mayo Clinic.