Remembering Dr. Richard Hill, the first board chair at Mayo Clinic in Arizona 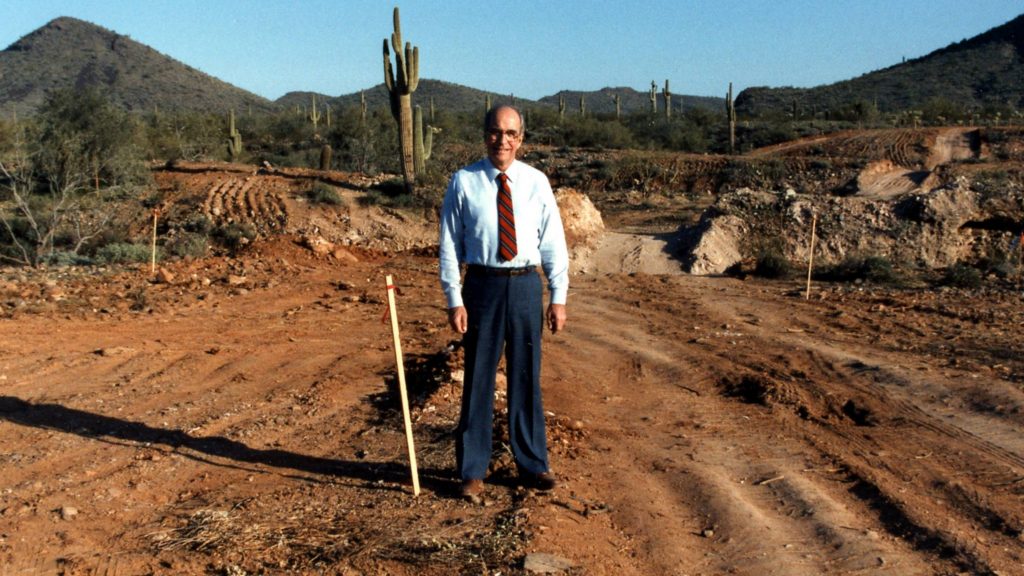 Richard Hill, M.D., the first chair of the Board of Governors at Mayo Clinic in Arizona, passed away on Wednesday, March 24. Dr. Hill was 94.

One of Dr. Hill’s many notable achievements during his 34-year career at Mayo was establishing Mayo Clinic in Arizona. Beginning in 1984 when the decision was made to expand in the Southwest, Dr. Hill and his wife, Barbara, spent countless hours in Arizona to lay the foundation for Mayo Clinic’s practice. He was instrumental in locating the 140 undeveloped acres where the Scottsdale campus now stands.

During the next three years, Dr. Hill worked with architects to plan and build the Mayo Clinic Building in Scottsdale and developed a relationship with Scottsdale Memorial Hospital (now HonorHealth). Driven to perpetuate the elements of Mayo history and culture critical to its ability to provide evidence-based, high quality patient care, Dr. Hill oversaw the recruitment, hiring and training of physician and allied health staff. He created an integrated, balanced institution and established operational systems to mirror those in Rochester and Jacksonville. Mayo Clinic opened in Arizona in 1987.

Dr. Hill had a long and extensive background in education and research. He earned a Bachelor of Science degree from Franklin and Marshall College in Lancaster, Pennsylvania, in 1949 and a medical degree from Jefferson Medical College in Philadelphia. He completed an internship at Lancaster General Hospital before attending Mayo Clinic Graduate School of Medicine and earning an M.S. degree in medicine from the University of Minnesota in 1957. Dr. Hill completed a residency and a research fellowship in hematology at the University of Rochester School of Medicine in Rochester, New York. In 1958, he joined Mayo Clinic as a consultant in hematology and internal medicine and advanced through the academic ranks to become associate professor of medicine and hematology at Mayo Clinic College of Medicine in 1974.

Dr. Hill retired from Mayo Clinic in 1992. He firmly believed in the culture and Mayo Clinic model of care practices that differentiate Mayo Clinic.

Dr. Hill founded the Mayo Clinic Arizona Emeriti Association and in 1998, he served as the first president. He continued to participate as a member of the organization in professional and social activities throughout retirement.

“I still think that the quote from Will Mayo, which is over the main stairway in the clinic building, that the only interest to be concerned about is the interest of the patient is certainly the key to Mayo’s operation.” Dr. Hill said in an interview in 2006.

Dr. Hill also commented about other practices unique to Mayo saying, “There is a camaraderie across the board at Mayo Clinic, which I think is unmatched in other medical centers in this country. In Rochester, we were all brought up in our profession to work together to help each other and to consult with each other about any patient that we were asked to see. This camaraderie and discussion between physicians in different specialties is a valuable approach to patient care. I think that this is one of the main differences between Mayo Clinic and other health organizations.”

Dr. Hill continued to play an influential role as an emeritus faculty member and past CEO, lending his historical knowledge and frank appraisal to new leaders at Mayo Clinic in Arizona.

“We are grateful for the wisdom and expertise Dr. Hill brought to Mayo Clinic,” says Gianrico  Farrugia, M.D., president and CEO, Mayo Clinic “His work had significant impact on the people and health care landscape of Arizona, the Southwest and beyond.”