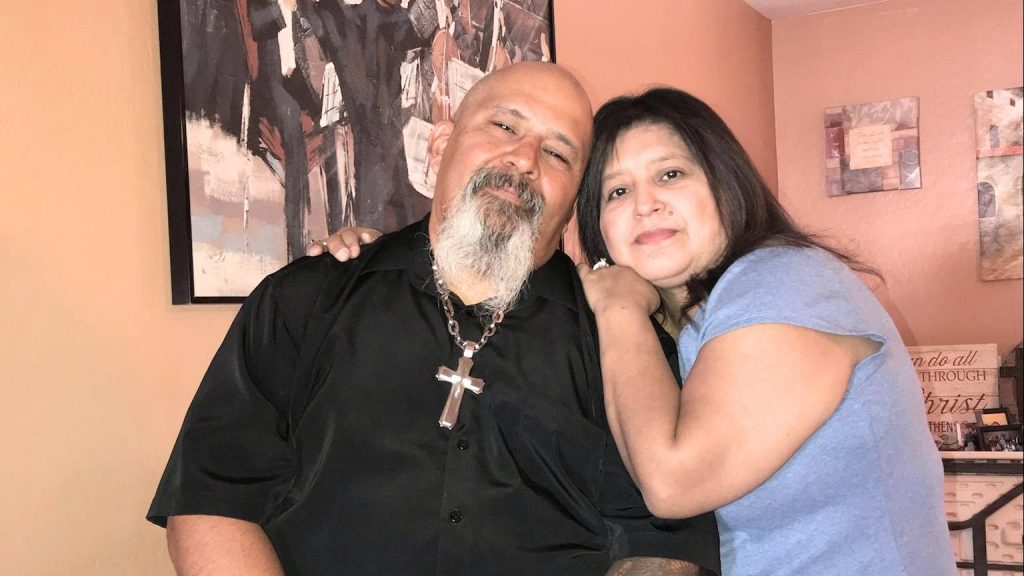 It’s not like Ernie Hernandez wasn’t used to the hot Arizona sun.  He was born and raised in Phoenix, Arizona, and worked as a skilled contractor in the masonry trade for 25 years. But the brutally hot sun one afternoon in 2018 proved to be too much. Ernie passed out.

“After I passed out that day, my doctor said I was done, and I couldn’t work any longer,” Ernie says. “After 25 years in masonry, I really miss it.”

That incident led Ernie, 52, on a medical journey that not only saved his life, but made him a celebrity of sorts when he became the first person in Arizona to undergo a combination heart and liver transplant at Mayo Clinic Hospital in Arizona on Oct. 26, 2020.

Ernie had been battling congestive heart failure since 2015, when his cardiologist discovered that half of his heart was pumping at only 10 or 12 percent.  He kept on working, even though he had been outfitted with a defibrillator to monitor his heart rhythms. Ernie then learned that his liver was also exhibiting problems. “I think that my heart problems damaged my liver,” he suspects.

As Ernie’s health continued to decline, he was referred to Mayo Clinic, where he underwent comprehensive testing.  It was confirmed by the transplant physicians and surgeons that Ernie would require both a heart and liver transplant—at the same time.  On Oct. 5, 2020, he was placed on the United Network for Organ Sharing waiting list.

Ernie sees his diagnosis as a blessing.  “I wasn’t scared,” he confirms. “I put my faith in the hands of my Lord. I want to be around, because I have two daughters. I want to see them get married and have children of their own.”

On Oct. 22, Ernie was admitted to Mayo Clinic Hospital because the battery on his device was getting low.  Because of Ernie’s condition, he was advised to stay in the hospital until the time when both organs that he needed would become available.

Just three days later, on Sunday morning, Oct. 25, the time had come. “The whole transplant team came in to tell me that a heart and liver were waiting for me,” Ernie recalls. His wife, Liz, whom he describes as “a blessing,” was on her way to the hospital at the time. He recalls “lots of hugs, kisses and prayers” that took place before he was taken to the operating room. He learned later that his complex surgeries took 12 hours, making the official date of his transplants Oct. 26.

Ernie spent a few days in the ICU, where he recalls “lots of tubes” and “a long sleep.” He was discharged on Nov. 3, 2020, and he returns regularly to Mayo Clinic for follow-up appointments.

Ernie says he feels “a lot more energized, and not in pain.”  He was advised by his care team to walk around, and he complies.  “All is looking good,” he says. “I’m happy.” Ernie thinks about the family that made the generous decision to donate their loved one’s organs. “I am keeping them in my prayers,” says Ernie. “May God bless them for giving me a second chance.”

Liz, who works for the city of Surprise, Arizona, and their daughter, Kiana, have served as Ernie’s caregivers.  It is a role they gladly take on to ensure that Ernie takes his medications and eats healthy food.

Ernie and Liz are grateful to Mayo Clinic for the care he has received. “I am so grateful to my liver and heart team. I thank them with all my old heart, and my new heart,” Ernie says.