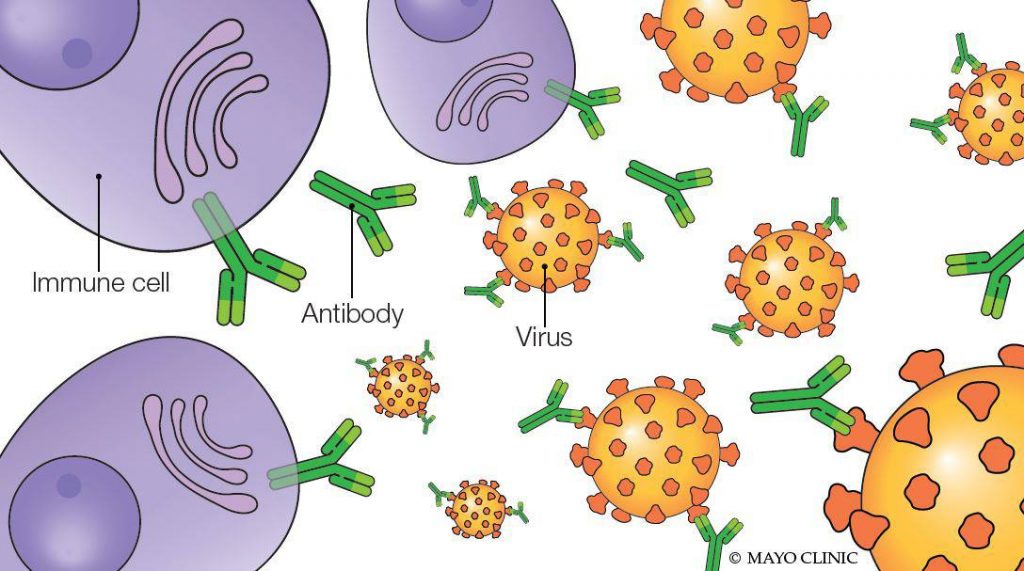 Current experimental treatments for COVID-19 focus on two targets: the virus or the immune system.  On the immune system side, the number of experimental treatments is growing. The vast majority are called monoclonal antibodies. This type of drug is not new, and many are currently approved to treat conditions such as cancer or rheumatoid arthritis. But some are being developed from scratch to boost the initial immune response for patients who are at risk of severe COVID-19 disease. These experimental drugs may provide patients with a way to get ahead of the virus and help manage the strain on hospital intensive care services. But what are monoclonal antibodies?

Antibodies are Y-shaped snippets of protein made by the immune system. They have various functions, but basically, antibodies flag things the immune system needs to investigate. For example: When a virus invades a cell, it enters across through the cell’s membrane, takes over and makes copies. These copies are released from the cell to head out and infect other cells. As the virus travels, some of these bad actors trip an immune system “red alert.” After a series of events, immune system B cells transform into plasma cells and begin to churn out antibodies. Each B cell makes millions of copies of a single antibody.

When needed, each B cell will divide into two daughter B cells that are essentially clones of the parent. These clones produce the same antibody. Antibodies stick to specific parts of the virus, recognizing different targets on the virus particle. This response is called polyclonal ― “poly” because you have many different antibodies and “clonal” because each type of antibody comes from a set of cloned B cells. If an antibody sticks to a part of the virus in a way that prevents it from getting into the cell — like the spike proteins on SARS-CoV-2 — then they are called neutralizing antibodies.