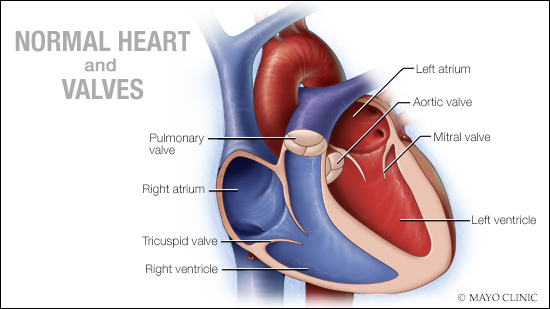 DEAR MAYO CLINIC: My father is having issues with his aortic valve. He is 53 years old and was told he needs to have a valve replacement. I was reading that there are different types of valves. Can you explain the differences and what option may be best?

ANSWER: There are four major valves in the heart, two on the left side of the heart (aortic and mitral) and two on the right side of the heart (pulmonary and tricuspid). Heart valves serve as “one-way doors” allowing blood flow through the heart. Valves can fail because they have difficulties opening (stenosis), leaking (regurgitation) or both. These conditions may lead to heart valve surgery. Sometimes, when the mitral or tricuspid valves fail because of regurgitation, they can be repaired. And if a valve is repairable, that is preferred to replacement.

However, many times, valves require replacement when they fail. There are two major types of prostheses used for valve replacements: mechanical valves and tissue valves. One type of prosthesis may be a better option for your father, so which valve is right requires some thought.

Mechanical valves are most commonly used when replacing the aortic and mitral valves. Types of mechanical prostheses have evolved over time, but most modern ones are made of pyrolytic carbon and have two tilting discs that allow blood to flow one way through them.

Tissue valves are made from porcine (pig) or bovine (cow) tissue, and can be used to replace any cardiac valve. Tissue valves can be implanted surgically, just like mechanical valves, where the old valve is removed and the new prosthesis is sewn in its place.

In the last 15 years, transcatheter valve replacement has emerged as a different way to implant tissue valves, used almost exclusively for aortic valve stenosis. This procedure, called transcatheter aortic valve replacement or TAVR, avoids the need for a sternotomy and often has a much shorter hospital stay. I always think of TAVR as a “valve on a stick” because a tissue prosthesis is crimped onto a balloon catheter, which is then placed in an artery (often the femoral artery in the groin) and snaked up to the heart. The TAVR prosthesis is then ballooned open inside the old valve, smooshing it out of the way. TAVR requires patients to have adequate blood vessels and a large enough native aortic valve to accommodate the new prosthesis inside of it.

There are two main benefits to a tissue valve. First, the potential option for transcatheter delivery (particularly in aortic stenosis); and second, the fact that after the initial implantation time period, they do not require warfarin, only aspirin. The biggest drawback of tissue valves is their durability. An average tissue prosthesis lifespan is about 10 years, however, in younger patients or those on dialysis, they can deteriorate much faster. When tissue prostheses fail, they become stenotic or regurgitant, just like native valves, and then require repeat replacement.

So, which valve is right for your father? The risk of valve infection does not differ between tissue and mechanical prostheses, and neither require immunosuppressive medications. If valve replacement is needed on a right-sided valve in a patient older than 70 or in patients with contraindications to warfarin, a tissue valve is likely the right choice. In patients younger than 50 or patients already on anticoagulation for other reasons, such as atrial fibrillation, a mechanical valve is often the right choice.

Although this doesn’t apply to your father, I do recommend that young patients who want to become pregnant or who are participating in very physical sports with a high bleeding risk consider a tissue valve to avoid warfarin in the short term, with the knowledge that it is a temporary treatment expected to require repeat replacement. As your father is still relatively young, it is important that he talks with his cardiologist about the pros and cons of his personal situation so he can make an informed decision. ― Dr. Jeffrey Geske, Cardiovascular Medicine, Mayo Clinic, Rochester, Minnesota