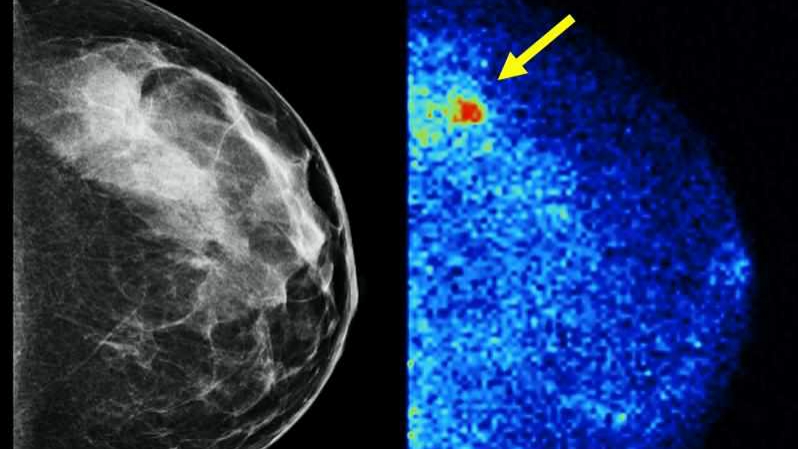 ANSWER: When health care providers say “breast density” or “dense breasts,” they are referring to how the breasts look on a mammogram. Women have different amounts of tissue and different types of tissue in their breasts.

Breasts are composed of fat, connective tissue that holds the breasts together, and the part of the breast that makes milk when breastfeeding. Those tissues look different on a mammogram. We can see through the fat, which appears black on a mammogram. However, the other types of tissue are white and can be difficult to see through. Dense breast tissue can make it more challenging to see cancer on a mammogram because the dense tissue and the cancer are both white. Dense breasts are common, with about half of women having dense breasts.

Because of these issues, Mayo Clinic developed a test called molecular breast imaging, or MBI, which looks at the function of the breast tissue rather than the anatomy. We have performed several large screening trials and incorporated MBI into Mayo’s clinical practice. Molecular breast imaging consistently finds about three to four times more breast cancers in women who have dense breast tissue than screening mammography alone.

Molecular breast imaging and mammography have only been studied where MBI is performed in addition to mammography. There are a couple of reasons for this.

Mammography is really good at detecting calcifications, which you can think of as tiny stones or grains of sand in the breast. Calcifications sometimes can be the earliest sign of breast cancer. Molecular breast imaging does not perform as well with abnormalities that present as calcifications only. However, MBI is very good at finding those lesions that might be hiding in the dense breast tissue, so they really work in concert together.

Molecular breast imaging uses a radiotracer, which is a radioactive agent that goes to active parts of the breast and lights up in areas that have more metabolic activity, like cancer. That activity is detected with a special camera. The radiotracer used in MBI has been used for a long time, and it is safe. The radiation doses for mammography and molecular breast imaging are very low ― below the amount of background radiation we get just by walking around outside. Any risk from radiation at these extraordinarily low doses is purely theoretical. In contrast, it is known that the risk of breast cancer is real for women. One in 8 women is going to get breast cancer in her lifetime, and the goal is to find those cancers while they are small and most treatable. MBI is one tool that helps do that.

In a molecular breast imaging exam, a woman receives an injection of the radiotracer. The breasts are placed in mild compression to stabilize them while pictures are taken, but it’s less compression than a mammogram and most women report that it is not uncomfortable. Imaging takes about 40 minutes, and patients can watch a show or play a game on their phone while the pictures are taken. Women should get their yearly screening mammograms, and those women with dense breast tissue should consider supplemental screening. Molecular breast imaging is an important complementary tool that helps find cancers that might otherwise go undetected for a long period of time because they can’t be seen on a mammogram. — Dr. Katie Hunt, Division of Breast Imaging, Mayo Clinic, Rochester, Minnesota