Chain of transplants gives gift of life to Minnesota teacher 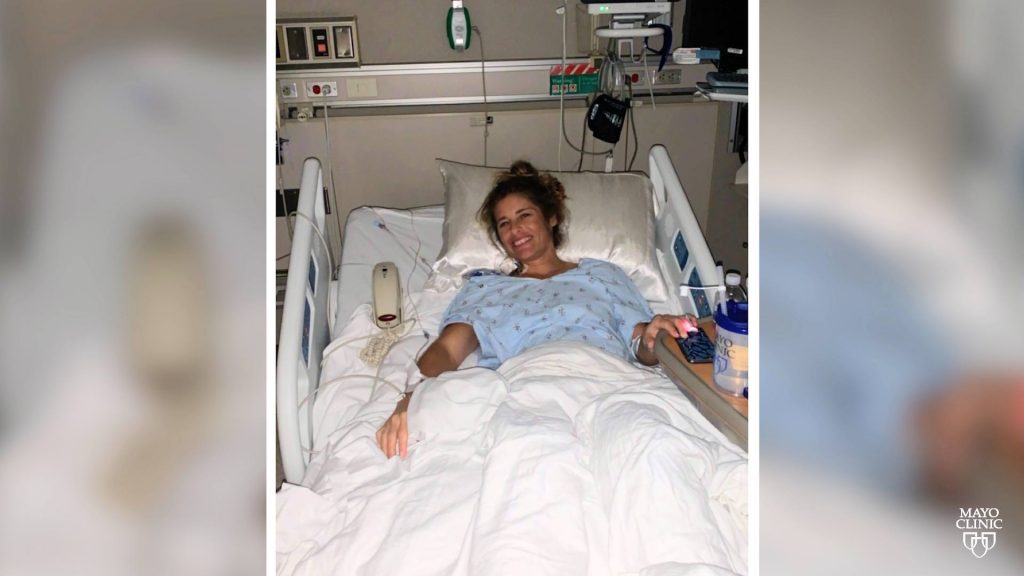 Nearly 100,000 Americans are on a waiting list to receive a kidney transplant.

For one Minnesota woman, finding a match appeared to be hopeless. She had a 1 in 3,000 chance of finding a kidney that her body would accept. Waiting on the deceased donor list could have been a death sentence, but thanks to a living donor transplant chain that spanned across the country, she has a new kidney and a new lease on life.

Reporter Jason Howland has the story.

Journalists: Broadcast-quality video (3:16) is in the downloads at the end of this post. Please “Courtesy: Mayo Clinic News Network.” Read the script.

Amy Infanger is a 44-year-old math teacher and high school tennis coach in Osakis, Minnesota. She and husband, Bill Infanger, have two sons in college. She also comes from a larger, extended family ― one that has been greatly affected by a rare, genetic kidney disease.

“My mom has eight siblings in her family. And of the eight, six of them have needed a transplant or two. And, so, I knew that it was very likely I was going to end up with the same condition,” says Amy.

She was diagnosed with the disease a few years ago.

“The patients develop cysts in their kidneys and sometimes other organs. And, eventually — typically in their 40s or 50s — they develop end-stage kidney disease. That means their kidneys no longer work,” says Dr. Mikel Prieto, a Mayo Clinic transplant surgeon.

She would need a transplant.

“We found out in our initial screening at Mayo that Amy was highly sensitized. And it was just going to be really hard to find a match,” says Bill. “And I had been screened to see if I could be a donor for Amy. They said, ‘No, you can’t.’ But then they introduced us to the paired donor program.”

Meanwhile, across the country in Arizona, Eric Cunningham was hoping to help a friend of a friend by donating his kidney.

“I was unable to be a direct donor for her. But I really felt the need to continue on, since I had already been approved to donate and was healthy enough to donate,” Eric says.

Eric joined the National Kidney Registry, offering his kidney for paired donation with a stranger.

“And I was told that, ‘Hey, we’ve got a match.’ And it was mentioned that there was the possibility of being the first part in a large chain,” he says.

A kidney transplant chain set into motion by Eric involved 16 people from coast to coast, including the Infangers in Minnesota and the top transplant centers across the country, including Mayo Clinic in Arizona, Florida and Minnesota.

“Getting a living donor was huge,” says Amy.

As part of the chain, she received a kidney from someone in Boston. Her husband was the last link when he donated his kidney to a person in New York City.

“I think it is a game-changer. And I think it is the way we are going to be doing transplants in the future,” says Dr. Prieto. “We were able to find the needle in the haystack: the kidney that was a match for her.”

It was a match that maybe saved Amy life.

“By this person doing this for me, maybe I never have to have another one,” she says.

“She will have a very good quality of life. Her life expectancy should be essentially normal like everybody else. I expect her to grow to a very old age,” says Dr. Prieto.

“This person that you care about so much, their health is fading. And to have that behind us and to have that not be a part of our life anymore — hopefully if this continues to go well — is such a relief. And it’s the best thing we could ever see,” says Bill.

“To know that was kind of the beginning domino to start this whole thing, it’s a really cool thing to think of the lives that are impacted and changed,” says Eric. “I’ve got two good kidneys. Why not? Why not share one?”